What story from the book came to you first?
‘The Pig and the Cockfight’ – it’s a quirky tale about buying a pig for my housekeeper back in Bali. She was a cook, child minder, guide and interpreter. Her pig was an investment. Cockfights precede major temple ceremonies in Bali, and just how the pig became involved is the story.

How did the stories change as you begin to write them?
I wanted to write about seeing and not seeing aspects of other cultures – that was my theme. Starting with a vague storyline, I jotted down a loose structure, just headings, chunks of information and links to websites. Next, I started to think about context and the setting – how, when, where and why. At times I did this while walking or paddling my kayak. My first efforts were in a diarised format. There was also a lot of repetition, so I used [word cloud generator] Wordle to help assess and remedy that. In the end, my style wasn’t very engaging. Though people were polite about my stories, eventually one friend said ‘I don’t want you to tell me, I want to find out’. This made me think, but I didn’t resolve the problem until I found a publisher.

What was the process like to get this book from manuscript into the publishing machine?
At first it was challenging. I posted some stories on my blog and formally pitched my concept to publishers, with a sample chapter and book outline. Two rejected it but finally a third, Interactive Publications (IP), took an interest. They found my stories compelling and authentic, but said plainly that readers want stories to emerge from the interactions between characters. My confidence was buoyed with a contract in sight. Writing dialogue was the task. I spent nine months transforming 29 stories. IP liked them but the manuscript was 30,000 words too long and the dialogue didn’t always flow. So they mentored me through a structural edit and tightening up the dialogue. This is when I really started to consolidate my skills as a writer of short stories.

What is it about writing that resonates with you most?
Using my skills in observation and interpretation, filtered through my imagination, to create something new and distinctive for others to read.

How do you personally deal with writers block?
I accept that it’s a reality and there’s no shame in having it. It can feel intractable in the face of the burdens of work and raising families. It always passes and I can help it along its way by staying healthy, having enough sleep and physical activity. Sometimes it’s just a matter of waiting for the right time while continuing to think and plan.

How has the ANZA writers group been going so far since you took it on board?
I feel we’ve developed a very warm and supportive atmosphere, even though numbers have waxed and waned through the year. We’ve had some fine open and stimulating discussions and our diverse backgrounds and experiences bring a lot of insight. I sense that people enjoy the group.

Seen and Unseen: a century of stories from Asia and the Pacific will launch early next year. 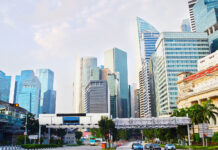 Burnout in Singapore: The cost to employees & companies

Make your small business successful from the start

Workplace changes to expect in 2022

JCU: The Place for Gaming Enthusiasts