It’s been said that every street has a story to tell in Berlin. The German capital was front and centre for so much defining history of the past century, ranging from unmitigated chaos to world-changing high drama. But rather than push history away and not delve into its darker elements, modern Berliners have embraced their past as part of the narrative of their complex and often conflicted city.

For all the wonderful bars and restaurants, vivid arts scene, and the beauty of its grand architecture and parklands, Berlin’s history is top of most visitor’s agenda. There are tours galore offering time travelling walks along the streets that so potently changed the course of history.

Tales abound, from the time of the Prussian kings, to the phenomenon of the Nazi era, and the carnage of war, when two-thirds of the city was destroyed. There are later chapters like when the Berlin Wall divided the city, and then after its fall, the decades of reunification that continue to the present day. Berlin never runs short of tales – here are six places where history jumps off the page.

The Reichstag is the historic seat of the German parliament and was built in 1894 but was burned in 1933 by the Nazis, as a pretext for the persecution of political opponents. Left as a ruin for decades, it was fully restored after the fall of the Berlin Wall and when Berlin became the capital once more, reopened in 1999. The glass dome that today sits on top of the Reichstag has become its main attraction, offering extraordinary views over the city. Advance online bookings are essential. visite.bundestag.de

The Brandenburg Gate is defining symbol of Berlin and the city’s most famous landmark,  commissioned by King Frederick Wilhelm II in 1788. The imposing sandstone monument consists of 12 giant columns and is 26 metres tall. Atop the gate is a chariot drawn by four horses, carrying Victoria, the goddess of victory. Located in the Mitte district’s Pariser Platz, the gate is a block away from the Reichstag. During the Cold War, its position as a blocked gate on the Berlin Wall made it a frequent site for demonstrations, and as the backdrop for powerful and iconic speeches by US Presidents John Kennedy and Ronald Reagan.

Memorial to the Murdered Jews is a couple of blocks from the Brandenberg Gate on Cora-Berliner-Strasse – a powerful memorial and underground museum, dedicated to the Jewish victims of the Nazi Holocaust. The memorial consists of 2,711 concrete slabs of varying heights, arranged in a grid that covers almost a city block. To gain the full effect of the structure, walk through the sea of slabs for the sense of disorientation and confusion. The memorial’s underground museum includes the story of how this devastating chapter in history unfolded. stiftung-denkmal.de/en/home.html 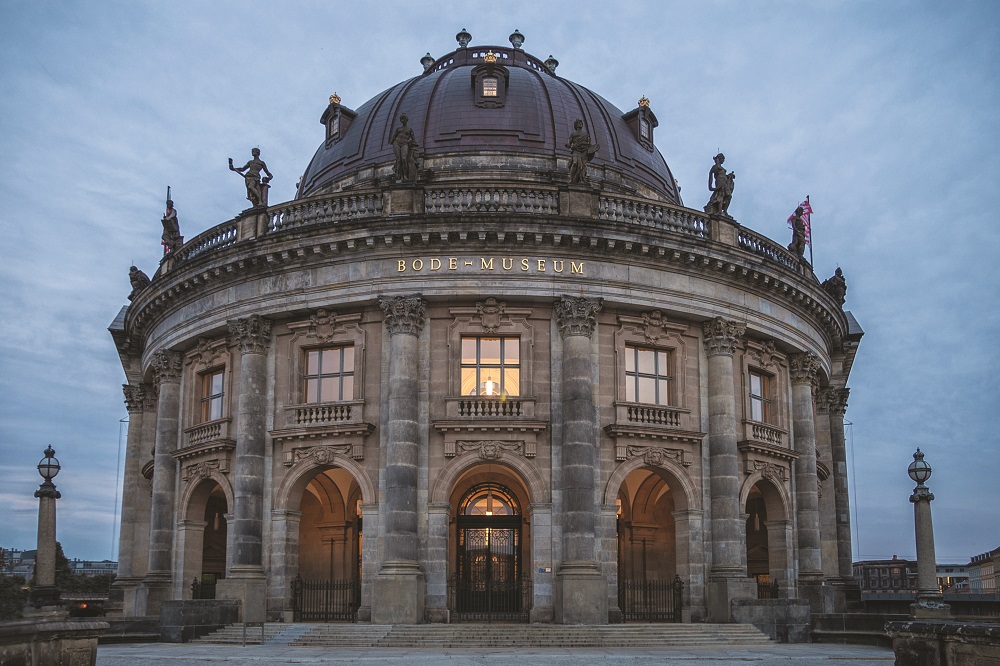 The UNESCO World Heritage listed Museum Island includes five institutions – Pergamon Museum, Bode-Museum, Neues Museum, Old National Gallery and Old Museum. The Pergamon is the most visited and home to three main galleries – the Middle East Museum, the Islamic Art Museum, and Antiquity collection. Taking the pride of place is the extraordinary Ishtar Gate of Babylon, which dates from 575BC and was reconstructed in 1930. Also on show is the Roman Market Gate of Miletus and the Mshatta Façade.
visitberlin.de/en/museum-island-in-berlin

In 1961, East Germany sealed off West Berlin with a 155km wall that surrounded the city, containing 293 observation towers and a lethal ‘Death Strip’. The wall finally came down in 1989 and the city – and country – was reunified. The Berlin Wall Memorial on Bernauer Strasse contains a 1.5km stretch of the barrier and a museum that charts the story of the years the city was divided. Across town at Friedrichstadt is the Checkpoint Charlie memorial, which was the best-known crossing point between East and West. berliner-mauer-gedenkstaette.de/en/

Only 30 years ago, where the famous square now stands, was a wasteland that had been destroyed during the war and then divided by the Berlin Wall. Today, Potsdamer Platz is a hive of business and retail activity, showing off a new style of contemporary architecture. The grand square is home to the Renzo Piano and Christoph Kohlbecker-designed Daimler Chrysler Quartier, the Beisheim Center, Sony Center and the Arkaden. Potsdamer Platz is a striking example of the way Berlin has reinvented itself since the wall came down.

For more on Berlin head to visitberlin.de

Next Stop, Berlin
Getting to Berlin is easier now than in previous years, due to the direct service from Singapore on Scoot Airlines. The low-cost carrier began flying between the two cities early last year, and the 10,000km journey into Berlin’s Tegel Airport takes just under 13 hours. One-way fares start from S$331 (check website for latest deals). Berlin is also the perfect stepping off point to the rest of Europe, as carriers like Ryanair and EasyJet fly from direct to London, Paris and Amsterdam.
flyscoot.com