Isabelle Walsh-Wyndham’s black and white house is in a scenic area north of Novena, backing onto the jungle that surrounds the historic Bukit Brown cemetery. On arrival, I admired the stunning jungle vistas until Isabelle casually mentioned the resident (harmless) snake in her mailbox, and the venomous black spitting cobra spotted on her terrace and laundry room in recent days. Snakes aside, the house makes the most of its location, beautifully set up for indoor-outdoor living. The entrance leads to a light-filled, spacious living and dining room with sliding doors onto a wide, shady verandah that runs the length of the house. From the verandah and the adjacent pool, all you see is greenery. A master bedroom has been converted into two smaller bedrooms for the children, with the parents’ bedroom close by. The other end of the house features the kitchen, a guest room and two rooms used as a music room and office.

Serendipitous search
Isabelle, her husband Leo and their son and daughter have lived here for two years. “Prior to that we were in at Holland Village in a little house at Chip Bee Gardens. We loved it, until one day someone erected a barrier at the end of the garden and started destroying the houses behind to build a four-storey condo. We really struggled with leaving, as we loved the house and the location, but we didn’t know if we could go through two years of building noise,” explains Isabelle.
The family set their sights on a uniquely Singaporean house. “We were looking for a black and white or a shophouse. We thought, we’re never going to live in anything else that’s so Singaporean so let’s try it.”
Isabelle viewed a nearby house on Mt Pleasant Road, and on returning for a second look drove past a family she knew from her son’s school class. “I stopped to say hello, and the Dad asked what I was doing here. I told him about the house search, and he said ‘Why don’t you take our house? We’re leaving this summer.’ It was a bit of serendipity.”
“There’s no MRT station and the bus is two kilometres away so there is a drawback to this location. The convenience of Holland Village is missing but every day I walk in here and I feel at peace. In the morning I walk for half an hour in the jungle, then do a bit of Pilates and my reward is a cup of coffee on the couch outside. I really try to make the most of where we are. We’re never going to live in a place like this again. Snakes and all!”

Passion for design
As an interior designer, Isabelle has a passion for design that naturally extends to her own house. “This house is a good reflection of Leo and myself. Everything has a specific place in our hearts. “ Isabelle says of her design style: “It’s an organic process – you collect things over the years and then arrange them in whatever new space you have. I really wanted a feel that was ‘tropical modernism’. I wanted the jungle to come out and for the space to feel green and flowery. So, we have rattan and natural materials and a South East Asian vibe, but also my husband and I really like some modernist furniture and designers and it needed to work together.”

Treasured pieces
The living and dining space hold some of Isabelle’s favourite pieces.“The shelves, are by an Italian designer called Gio Ponti, who I found when I was doing my interior design studies. They’re very simple but beautifully designed. And the dining room chairs I had custom-made for this house. They’re inspired by a designer called Pierre Jeanneret.”
The family has a passion for art, extending to the wood-framed TV that displays artwork when not in use. “Some of the artwork are actually photos of the original works, because we didn’t want them damaged by humidity. They’re in a storage facility, but we still get to see them every day!” One unique piece in the dining area holds special meaning for the family, a blown-up section of a magazine cover from the 1960s featuring Leo’s grandmother. “His grandparents were quite a prominent couple in Shiraz, and she was the curator for the Museum of Shiraz. This is the Iranian equivalent of Hello magazine. It’s so kitsch but at the same time, it’s family.”
Moving to this relatively quiet area has changed the family’s lifestyle in small ways. “We often entertain outdoors and we don’t go out so much in Singapore now, because we have this. When we go to places we think, ‘this is great…but it’s really nice at home too’. We were looking at going to Borneo to see the jungle and the orangutans, but then we thought, well, we have a jungle at home!”

Setting Sail on Quantum of the Seas 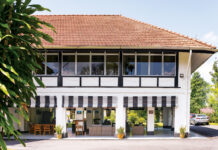